Zionist Federation to lobby Parliament on Pledge For Peace

Zionist Federation to lobby Parliament on Pledge For Peace

The Zionist Federation will use its upcoming Lobby Day for Israel 2017 to encourage politicians to back a ‘Pledge for Peace,’ consisting of three principles that will better facilitate positive, pragmatic and pro-active engagement in resolving the Israeli-Palestinian conflict.

The ZF’s Lobby Day for Israel, run every year in partnership with Christian Friends of Israel UK, brings activists from across the political and religious spectrum into parliament, where they speak directly with their elected representatives.

The three principles of the pledge are: 1) Direct Negotiations, 2) Dialogue Not Boycotts, and 3) Support Coexistence. Endorsing the principles would be an opportunity for politicians to display a balanced and realistic approach to the conflict. 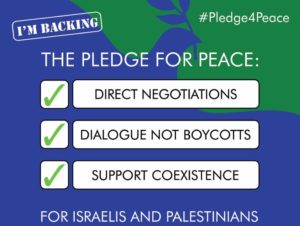 The Lobby Day follows in the wake of UN Resolution 2334, which was widely regarded in Israel as a harmful attempt to impose final status conditions, as well as disincentivising the Palestinian Authority from returning to the negotiating table.

A social media campaign (#Pledge4Peace) on the day will also encourage people to share photos of themselves with the pledge.

“The issue of the Israeli-Palestinian conflict has once again become headline news. But despite the renewed focus, too much of the discussion dissolves into meaningless platitudes and irrelevant virtue signalling. The principles of the ZF Pledge for Peace represent an understanding that there is no quick-fix solution that can simply be imposed from above by the international community. Instead, we must support the conditions that will allow and encourage Israel and the Palestinians to negotiate peace for themselves”

The Lobby Day will be held on Wednesday 25th January. More information can be found at https://zionist.org.uk/event/annual-lobby-day-israel/ Those wishing to attend can sign up or get more information by emailing Chris@zfuk.org.