An evening with Her Excellency, Ambassador Tzipi Hotovely

It has been a year since Her Excellency Tzipi Hotovely, took up her appointment as Ambassador for the State of Israel to the Court of St James’s, and last night was the first time Mrs Hotovely was able to attend a meeting in person.  It was therefore, with some considerable pride, that the Zionist Federation of UK and Ireland, the World Zionist Organisation in the UK, Borehamwood and Elstree United Synagogue the Zionist Central Council of Manchester were able to host the Ambassador for an in-person event at the Borehamwood shul.

The format had been planned carefully in advance so that Natasha Hausdorff, legal director of UK Lawyers for Israel Charitable Trust, would interview the Ambassador with an opportunity for some questions towards the end.  Natasha was about 20 minutes in to the interview when two unexpected things happened. The first was a small number of protesters making themselves known.  The Ambassador was clearly unfazed since she simply said that this is a democracy and then carried on answering the questions put to her.

The second unexpected outcome was the Ambassador cutting short (politely of course) the questions from her interviewer and inviting input from the audience.  What followed was an engagement which was both serious and personal.  Ambassador Hotovely listened carefully to the questions put to her and answered them all, sometimes entering into dialogue with the questioner.  At the end of the formal event, the Ambassador cheerfully met with the audience and was clearly delighted to do so, answering additional questions and chatting warmly with those of us who had made the effort to come out on a chilly evening to hear what she had to say.

During the interview, Mrs Hotovely spoke about her concerns for the increasing threat from Iran and ever-present reality of the dangers of Islamist terror.  She was realistic about the prospects for peace, namely that unless Israel’s enemies are prepared to sit down and talk, then there can be no peace.  The Ambassador made the point which, although obvious, is too often missed – that Israel cannot impose peace on her enemies and in addition, there can be no compromises in protecting Israel’s citizens and its democracy.

In answer to a question from the audience about civil disturbances in Israel in May of this year, Ambassador Hotovely openly shared her concerns and emphasised that the Government needs to treat this seriously and address the causes as swiftly as possible.  She reinforced this by talking about Israel’s care for human life and the values that underline this care.

There is no doubt that Ambassador Hotovely is, to some, a controversial appointment.  It is my opinion that those who disrupted her are missing the point. As Ambassador, Mrs Hotovely is the representative of the State of Israel.  Her approach yesterday evening was both professional and personable, and it was very clear that she will welcome dialogue with anyone prepared to speak with her respectfully. Against that background, those who protested the event let themselves down by denying themselves an opportunity to engage with the Ambassador face to face, which she would have welcomed.

During the evening, Ambassador Hotovely told of the time when she met the Queen, as is customary for new Ambassadors. She was accompanied by her husband who asked the Queen what advice she could give.  The answer was relationships.  The Queen explained that developing relationships on a personal level is key.  Tzipi Hotovely demonstrated that personal approach very well yesterday evening and made it obvious that she would welcome dialogue with those who agree and disagree with her. The Zionist Federation was honoured to be one of the organisations involved with the Ambassador’s first in-person meeting and we look forward to many more events with her during the remainder of her appointment. 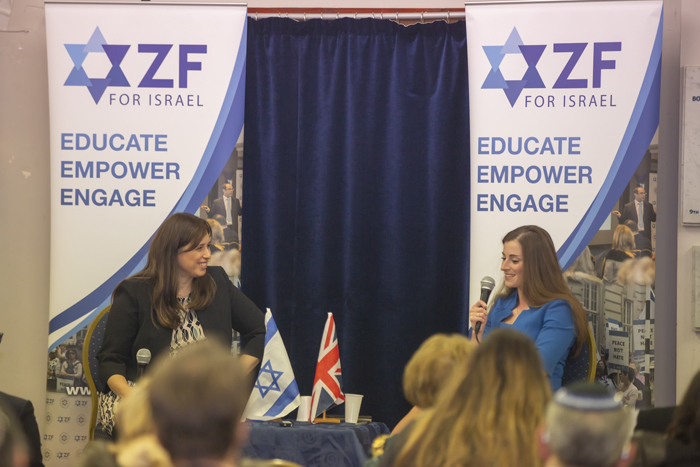 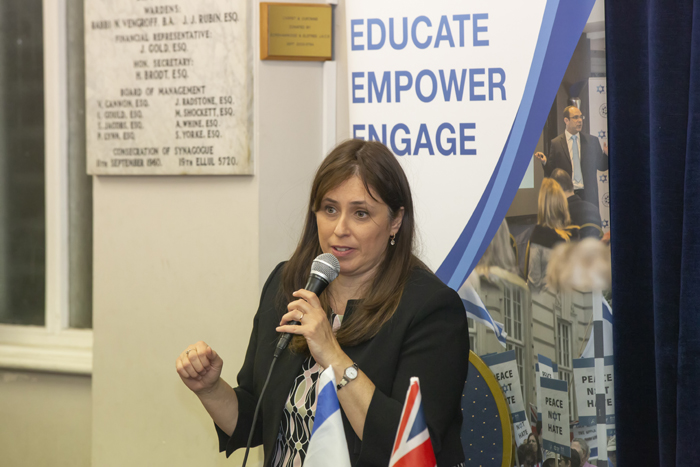