This week the Zionist Federation was proud to host Fleur Hassan-Nahoum for a UK and Ireland speaking tour. Showing the ZF’s commitment to being a truly national organisation the trip focused predominantly outside of London, and included Dublin, in the Republic of Ireland. This was a first in recent memory and the ZF was very pleased to be able to partner with individuals and organisations across the republic. 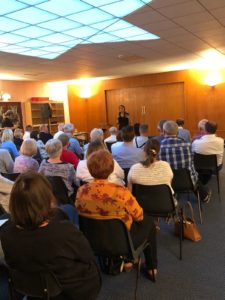 After speaking and meetings in the Irish Capital, the former Deputy Mayor of Jerusalem travelled North to Belfast in Northern Ireland where she met with politicians, civic leaders and members of the Jewish and Zionist communities. This was made possible with thanks to the Northern Ireland Friends of Israel and in particular Steven Jaffe.

During the trip Hassan-Nahoum was also able to speak to communities in Leeds, Manchester and Borehamwood, as well as interviews with the media.

Honored to have been invited to Dublin to speak to the Jewish community about Jerusalem our strengths and challenges @ZionistFed pic.twitter.com/YVUJ0QJWgQ