Statement from the ZF’s Attorney

Statement by Julian Hunt, Attorney to the Zionist Federation

This statement follows a Tweet by Na’amod : British Jews Against Occupation, on 1st February 2021. The Tweet is factually incorrect. I have the full support of the ZF board in writing this statement. I am sorry to have to do so but am reminded of one of our adages on the perils of letting some words go unanswered:
“Words can be like tiny doses of arsenic: They are swallowed unnoticed, appear to have no effect, and then after a little time the toxic reaction sets in after all.”

The Tweet by Na’Amod states: (a screenshot of the tweets can be seen below this statement)

“Since then, Markham has been sent to the World Zionist Congress by the @ZionistFed and has been given a platform at @limmud. Kahanism is being normalised in our community. Everyone who opposes racism and violent extremism must speak out against this.”

“We’ve now been sent social media posts from Harry Markham which prove beyond doubt that he is a supporter of Meir Kahane. If there is one thing the Jewish community must agree on its that there is no place for Kahanism. He can never be given a platform in communal spaces again.”

The 38th World Zionist Congress (WZC) which this Tweet refers to was held in Jerusalem from October 20 – 22, 2020. The Congress is the only democratically elected global Jewish forum and is the direct continuation of The First Zionist Congress, convened by Theodor Herzl in 1897. That gathering was the genesis of the modern Zionist movement and the original meeting of great minds that collectively put to paper the idea that the Jewish people should have a state of their own. Today, the WZC, occurring every five years, is the overall supreme ideological and policy-making body of the Zionist movement. The delegates and the bodies they form at the WZC determine the leadership and influence the policies of Israel’s National Institutions: the World Zionist Organization (WZO), the Jewish Agency for Israel (JAFI), Jewish National Fund-Keren Kayemet LeIsrael (JNF) and Keren Hayesod – which together allocate nearly $1 billion annually in funding in support of Israel and Jewish communities around the world.

In the UK, the ZF (as in other areas of the world) sets up an Area Election Committee which in turn sets up the local democratic process for electing delegates. This is a difficult and thankless task and involves a great deal of voluntary work to ensure elections are free and fair. The AEC contains a wide range of Zionist groups. Anyone who fulfils the following criteria below can vote in these elections for the slate they wish to. These criteria are:

In the UK, a variety of slates with differing political hues stood for election in 2020 and, so long as the appropriate number of votes were received, delegates from that slate would be elected to be sent to the Congress. In the UK for instance following the elections last year Mizrachi and Pro-Zion each had four seats and Mercaz, Likud UK and FZY (representing the Confederation of Zionists) two each. The Jewish Labour Movement, Herut UK, Over the Rainbow, Meretz and Hanoar Hatzioni were each given one seat or delegate.

What is very clear is that it is not the Zionist Federation that sends anyone at all to the Congress. It is voters who fulfil the necessary filtering criteria electing slates which themselves send individuals to the Congress. The ZF acts only, as it is constitutionally mandated to through being the local Zionist federation, as a conduit organising the elections via an Area Election Committee with ultimate oversight via an independent Tribunal should there be a complaint about election irregularities.

To suggest that Mr Markham “has been sent to the World Zionist Congress by the @ZionistFed” is wrong, both in terms of a) who sent him and b) that he was not sent and therefore did not actually attend. All the ZF does via its Area Election Committee is set up the local mechanism for free and democratic elections to take place just as every local federation does wherever there is one. The slate sends a delegate or more than one delegate of its choice of its choice to the WZC. The ZF has no power whatsoever over who the slate sends to the Congress. It is not party to sending Mr Markham or anyone once every five years to any Congress.

Never allow facts to get in the way of a good tweet. 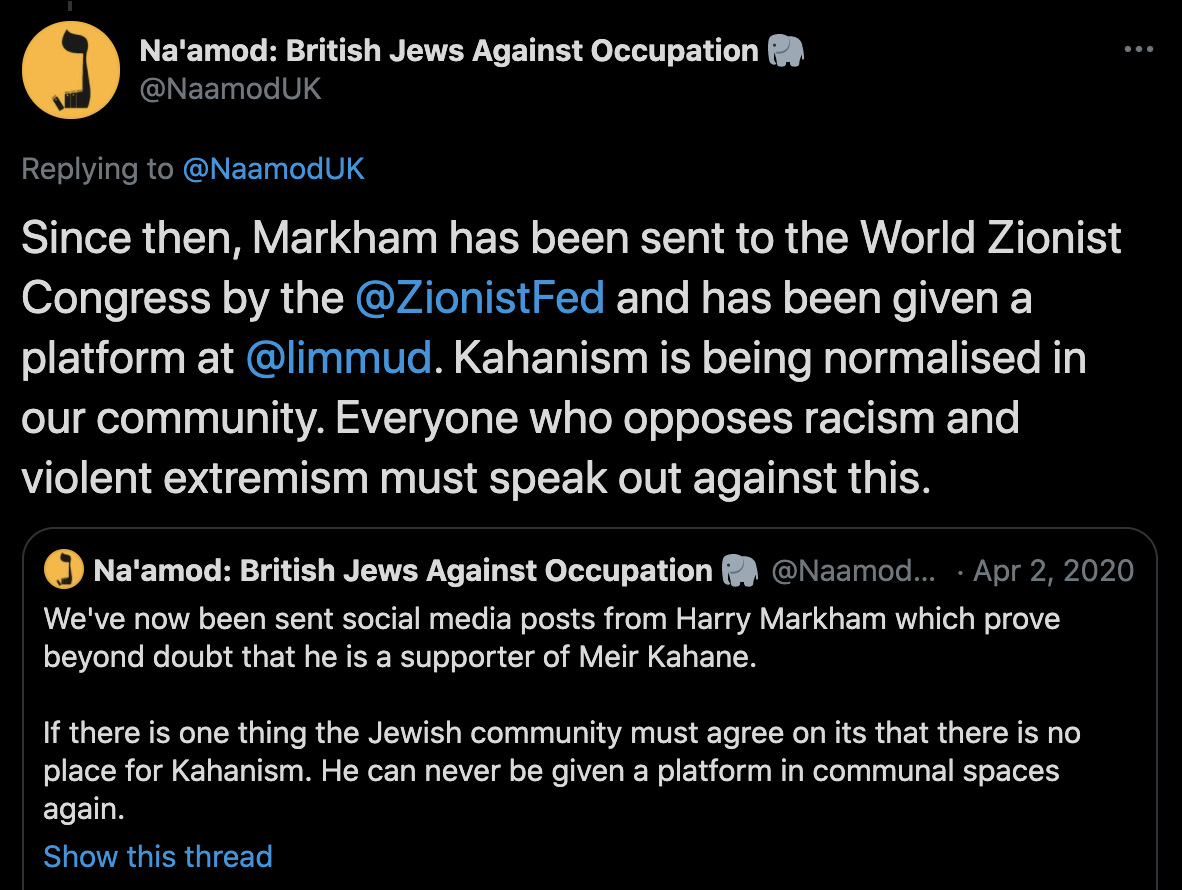