The UNHRC Blacklist: Fight it with Facts

This week, the United Nations sank to a new low in its seemingly obsessive anti-Israel bias when the Office of the UN High Commissioner for Human Rights (OHCHR) published a list of 112 companies and corporations that do business in Israeli settlements in Judea and Samaria (aka the West Bank), East Jerusalem and the Golan Heights.

It follows a 2016 UN Human Rights Council (UNHRC) resolution to compile a list of companies that operate inside Israeli settlements.

Its all about the settlements.
World leaders, the UN, the EU all claim the settlements as illegal. They also claim that they are an obstacle to peace whilst ignoring the intransigence of the Palestinian leadership and their relentless incitement and glorification of terror against Israel.

The United States and Israel worked for over three years to stop its publication, dubbed “the blacklist,” which they justifiably feared would be used to help those who oppose the settlements, to boycott businesses with ties to them. As if to further prove its obsessive anti-Israel bias, Israel is the only country against which such a list has been complied. Of all the disputed / occupied territories across the globe, the UN has once again singled out the Jew amongst the nations for opprobrium.

As UN Watch’s Hillel Neuer said, “Dictatorships initiated this blacklist not because they care about human rights, but to divert attention from serial rights abuses committed by council members like Venezuela, Libya, and DR Congo, by scapegoating the Jewish state.”

There is a word for that, and its often referred to as the world’s oldest hate.

But of course, the UN’s OHCHR maintains that the settlements are illegal under international law, and whilst this is a position is held by the majority of the international community, with the notable exception of the current US Administration, the issue is far from black and white and in fact, when one considers all the facts, one begins to realise, as Israel maintains, that the claims of the settlements’ illegality is a political position which doesn’t stand up to scrutiny under international law.

And so the ZF have recently created a booklet entitled ‘Israel’s “settlements”: The facts’, a booklet which we hope will help you to argue the case against this glaring example of the double standards to which Israel is so often held. 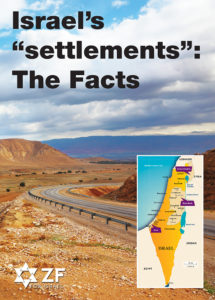 We will be printing the booklet over the coming weeks, so if any of your activist groups would like some copies, please do contact us at office@zionist.org.uk or call us on 020 8202 0202

The UN Commissioner’s announcement regarding the publication of a “blacklist” of companies represents the ultimate surrender to pressure exerted by countries and organizations interested in harming Israel. This announcement was made despite knowing that the majority of countries around the world declined to join this political pressure campaign.

The Commissioner’s decision to continue to pursue an anti-Israel stance at the UN Human Rights Council is a stain on the office of the UN Commissioner and on human rights itself. With this announcement, the Commissioner has become a partner and tool of the boycott movement, despite the ‘blacklist’ not having any tangible legal implication.

The Human Rights Council is comprised of countries that do not know the meaning of human rights. Since its establishment, the Council has not taken a single meaningful step towards the preservation of human rights, but has rather served to protect some of the most discriminatory regimes in the world.

The State of Israel will not tolerate this discriminatory anti-Israel policy, and will take action to prevent the implementation of these kinds of decisions.

“Whoever boycotts us will be boycotted. The UN Human Rights Council is a biased body that is devoid of influence. Not for nothing have I already ordered the severing of ties with it. It was also not for nothing that the American administration has taken this step together with us. In recent years, we have promoted laws in most US states, which determine that strong action is to be taken against whoever tries to boycott Israel. Therefore, this body is unimportant. Instead of the organization dealing with human rights, it only tries to disparage Israel. We strongly reject this contemptible effort.”