Yesterday I stood opposite flags of hatred. Yesterday I watched hundreds march through London waving the flags of an organisation dead-set on killing me. Yesterday the perpetrators of the Burgas bus bombing (2012), collaborators in mass killings in Syria, and those behind the attack on the Buenos Aires Jewish Community Centre (1994), were celebrated on the streets of London. Yesterday it made me sick to my stomach when the leader of the Al Quds day march blamed the horrific Grenfell Tower fire on the Zionists. 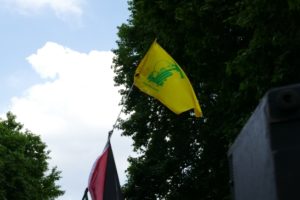 Al Quds Day is an international day started and sponsored by the Iranian regime. In the UK, in the heart of our capital city London, it is coordinated and run by the Islamic Human Rights Council (IHRC) and had some 500 participants. Every year there have been a few individuals waving Hezbollah flags. This year there were more being handed out to the crowd, as well as the IHRC releasing statements in advance supporting the flying of these flags.

So what is it that is so bad? Hezabollah sit in the Lebanese parliament. Hezbollah provide welfare for the people in Lebanon. Oh, and Hezbollah have amassed what is suspected to be a larger stockpile of rockets in the south of Lebanon (next to the border with Israel) than every European country put together!

On many (but not all) of these flags was a disclaimer; “This flag is to show my support for the political wing of Hezbollah”. Why they disclaimer? In the UK Hezbollah as a whole is not a proscribed organisation. However, the military wing of Hezbollah is. Therefore flying the flag of the military wing is banned, but flying the flag of the political wing is allowed. OK, that sounds sensible right? Except there is no difference in the flag! So the disclaimer is their legal loophole. Their “get out of jail free” card. The disclaimer is their way of sticking two fingers up at the British Government, the Police, and those who Hezbollah would happily murder. The disclaimer makes a mockery of our legal system. 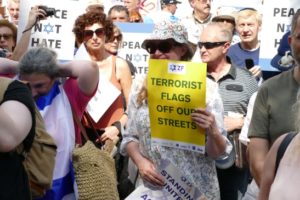 Flying a flag with an automatic rifle clenched in the fist of resistance emanating from the Arabic word “Allah” – God – has no political message. It is a message of violent resistance. So why and how do we allow this flag to continue to be flown on the streets of London?!

It is not OK to show support for terrorism on the streets of London, or anywhere else for that matter. It is not OK to scream “Go back to Russia” at the pro-Israel demonstrators as one marcher at the head of the group did. And it is certainly not OK to talk about the Zionists controlling big corporations, being responsible for Grenfell Tower, or revelling at the murder of children, all of which was done from the stage at yesterday’s protest.

So I am going to say it now, clearly and as loudly as I can. Enough is Enough! Let’s stop making excuses for these people who brazenly fly the flag of terrorists through the streets of London, through my home city. Let’s see them for who they are – supporters of the destruction of Israel.

When those carrying a flag with a rifle on, the flag of Hezbollah, scream “from the river [Jordan] to the [Mediterranean] sea, Palestine will be free” they are not talking about a political message. They are not suggesting a two-state solution. They are talking about the destruction of Israel in its entirety. So whether you are left wing, right wing or a centrist, lets stand united together and with one voice say, “Terrorist Flags, OFF OUR STREETS”.