Shining a spotlight on Samidoun.

This coming weekend, an organisation by the name of ‘Samidoun Palestinian Prisoner Solidarity Network’ (Samidoun) is co-hosting an event entitled “Speak Out For Palestinian Resistance”

The co-hosts are an assortment of charmers, amongst them ‘Victory for the Intifada’ (at best, “just” a name invoking a call for the Palestinians to rise up against Israel, at worst and far more likely, a call to kill Jews because, let’s face it, that’s what happens in the intifadas), the ‘RCG – Revolutionary Communist Group’ and lastly, ‘Fight racism. Fight Imperialism’ (FRFI) Manchester’. For the sake of this blog piece, we have chosen to focus on the main organiser Samidoun, because quite frankly, the others seem just to be different edges to the same coin anyway.

Samidoun’s premise for these events is the backdrop of the 48th anniversary of the death of one of its senior officials from the “Popular Front for the Liberation of Palestine” (PFLP) political bureau, Ghassan Kanafani. However, it should be noted that from July 1st 2020, Samidoun’s activities were increased in response to Israel’s proposed move to extend its sovereignty to areas in Judea and Samaria / the West Bank and Jordan Valley, and Samidoun’s weekend “events” will heavily focus on this. This ramp up of activity included Samidoun leading “Palestinian Day of Rage” protests in various cities around the world. In a demonstration in New York City (July 1st), calls for “Death to America” were heard and a flag of the designated terrorist organisation PFLP was waved alongside remarks equating the NYPD and IDF to the KKK, see image below. 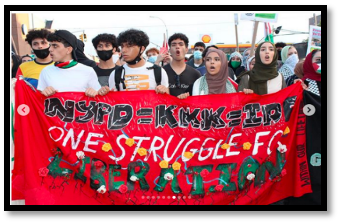 Samidoun was established in 2011, and has chapters and representatives throughout Europe, North America, Lebanon and the Palestinian-controlled territories. One of its main purposes is securing the release of PFLP terrorists from prison, whilst ideologically speaking, it supports BDS and openly calls for the dismantling of the State of Israel. The organisation is known to publicly make calls for Palestinians to fight against Israel using any means.

For those of you who aren’t aware, the PFLP is designated as a terrorist organisation by the USA, the EU, Japan, Canada and Australia.  It has consistently been the second-largest of the groups forming the Palestine Liberation Organisation (the PLO – founded in 1964), the largest being Fatah (founded in 1959).

In spite of Samidoun’s connections to, and support for the PFLP, Samidoun’s representatives have met with members of Congress and the EU Parliament.
US congresswoman Rashida Tlaib clearly wasn’t fazed by Samidoun’s affilation with the PFLP – quelle surprise – when she met with Joe Catron, Samidoun’s US coordinator, on Capitol Hill in Washington DC last year. And seemingly, the EU Parliament also wasn’t bothered by Samidoun’s tacit support for an EU-proscribed terrorist organisation, when one of its members, Manuel “Abu Carlos” Pineda, met with Mohammed Khatib – Samidoun’s European coordinator and a PFLP member – in Madrid this year.
Unbelievable right?
But it’s real, here are the images: 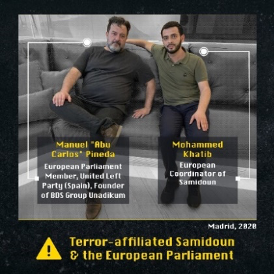 Considering all of the above, it should come as no surprise that there have been several senior PFLP members who have taken part in Samidoun’s webinars over the last few months (as at July 26th, 2020, Samidoun had held 18 webinars).

1) Khaled Barakat: a member of the PFLP Central Committee and coordinator of the efforts to release PFLP Secretary, General Ahmed Sa’adat. In an effort to cover his ties to the PFLP, Barakat is mostly presented as a “writer” and a Palestinian “rights activists”. On July 25th 2020, Barakat was the host of one of Samidoun’s webinars on the subject of “Palestine and the Arab and international boycott movement“.  Also attending was Majed Debsi, a PFLP member until at least 2017.

2) Abdul Latif Ghaith: On May 10th 2020, the Palestinian branch of Samidoun, in conjunction with several organisations, hosted the “The Palestinian National Movement in Jerusalem and Ways to Resist“. Abdul Latif Ghaith, the featured speaker, is a founder and chairman of the Executive Committee of Addameer (Arabic for “conscience”), a Palestinian NGO that works to support Palestinian political prisoners, and was a recognised member of the political bureau of the PFLP until at least the year 2015. Until at least October 2020, he is prohibited to leave Israel due to his ties to terrorism.

3) Leila Khaled: On May 3rd 2020, Samidoun, along with several other organisations, held a webinar on “The Zionist Lobby in America”. Among the participants were Khaled Barakat (see 1 above) and Leila Khaled. For those of you who are not aware of Ms Khaled’s past, she is the PFLP terrorist who rose to fame and prominence after twice hijacking passenger airplanes in the 1970s. In 2011 she coordinated between the PFLP HQ in Syria and one of its terror cells in Jerusalem in planning out an attack which would have included kidnapping, IEDs and shootings.

4) Muhammad Khatib: On April 30th 2020, Samidoun, along with a German organisation called HIRAK, hosted a webinar entitled, “Germany: Oppression and the Suppression of Palestinian Activism“. It focused mainly on Khaled Barakat’s arrest and deportation from Germany. During the webinar, Khaled Barakat and Mohammad Khatib (a PFLP member and Samidoun’s European coordinator mentioned above) repeated a number of times the anti-Israel slogan, “From  the River to the sea, Palestine will be free”, which is nothing less than a coded or inconspicuous call for Israel’s destruction, something that can be argued as Antisemitic under the IHRA definition on Antisemitism.

As if all of the above were not blood-chillingly nauseating enough, there’s more – and most likely far more – than is covered in this blog.

PFLP member Khaled Barakat’s spouse is Samidoun’s International Coordinator, Charlotte Kates. Kates and Barakat manage campaigns together and appear together at conferences. Here they are at an event in Denmark with a PFLP flag in the background: 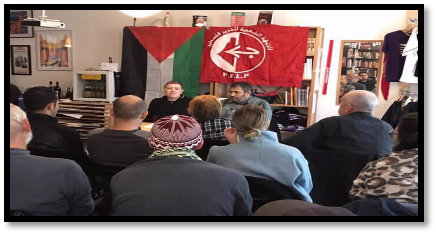 As previously mentioned, Barakat is a Central Committee member of the PFLP and the Solidarity Campaign Coordinator for the release of PFLP General Secretary Ahmad Sa’adat, one of the planners of the assassination of Israeli Tourism Minister Rehavam Ze’evi. The assassination is something that Barakat’s spouse, Charlotte Kates, wrote an article about in honour of an anniversary of Ze’evi’s assassination in Jerusalem on 17th October 2001. In it, she quoted a PFLP senior operative who termed the murder “a symbol of heroism” and even directs readers to the PFLP website which glorified the assassination – see this image below from the PFLP website commemorating the assassination. 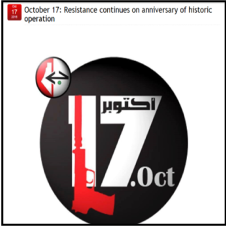 With his connection to Kates and the above facts in mind, it is neither illogical nor beyond the realms of possibility to assume that donations made through the Samidoun website may have benefitted Barakat and been transferred in part to the PFLP. 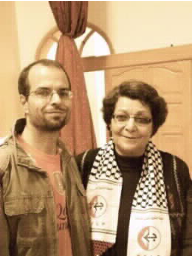 So, when you see word of events such as Samidoun’s and others, don’t ever doubt that lurking somewhere, there is all-too-often tacit and oft-direct links between the hosts of these “events” and designated terrorist organisations.

Please feel free to contact the ZF should you require details on the source of the information contained in this blog piece by emailing office@zionist.org.uk

Thanks to those who assisted in the research of this subject – they know who they are.