And now, the Israel-hate medal table…

By Paul Charney, Chairman of the Zionist Federation UK.

This piece originally appeared in the Jewish Chronicle. 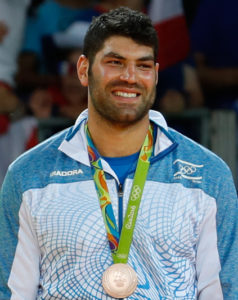 Ah, the Olympics. Who can fail to be moved by this glorious carnival of humanity? Who can fail to be enthralled by the spectacle of thousands of the world’s greatest athletes putting all those endless hours of training to the test? And who can fail to appreciate how they represent not only the countries whose flags they bear, but the set of values that make up what we all recognise as ‘sportsmanship’?

Well, the Middle East, apparently. Or more specifically, the Arab athletes who had the misfortune of coming into contact with their Israeli cousins in Rio. Because amongst all the thrills and spills, the spotlight has once again fallen upon how the oldest hatred manifests itself in the Middle East.

The Gold medal performance of course went to Egypt’s Islam El Shehaby, with a facepalm that launched a thousand memes. Following a resounding defeat to Israel’s Or Sasson in the 100+kg men’s judo, El Shehaby first broke protocol by ignoring the traditional post-fight mutual bowing. Then, in an act seemingly scripted to encapsulate the dynamic of the Arab/Israeli conflict in a single image, he rejected the offer of a handshake from Sasson. No magnanimous defeat for him.

(Dis)honourable mentions must also go to the Saudi Arabian judoka who apparently pulled out with a mysterious ailment before she fought an Israeli – a common ailment, it seems, at international competitions. And who could forget the Lebanese delegation who refused to allow their Israeli counterparts to share their bus with them. As we all remember from the civil rights struggle in America, racists get very particular about who is allowed to sit where on buses.

It would be wrong to look at these cases in isolation though. As with much prejudice, the bigger picture is with the institutional bigotry within the societies they hail from. These individuals will have known that refusing to interact with Israelis would see them lauded as heroes back home, and – more importantly – treating them like actual human beings could well have endangered their careers and even personal safety.

One of the ironies here is that in Israel (that “racist Zionist regime”), sport is often used a means to bring Jews and Arabs together. No such option for stereotype smashing is available in the rest of the region, however, given that all the Jews have been forced to leave. So these international occasions offer a rare opportunity for interaction in a non-politicised environment.

Part of the blame for why these opportunities are being poisoned by toxic anti-Zionism must go to the international community. In the same way sexism is often dismissed as “boys will be boys”, so too this prejudice is often hand-waved away as a normal reaction to the conflict – an attitude that hardly encourages progress. It’s time to get serious about kicking racism out of sport. These Olympics have once again reminded us that when it comes to anti-Jewish prejudice, we need to stop talking about Cable Street – and focus on the Arab Street instead.