This week the Zionist Federation, along with Finchley Synagogue (Kinloss) had the pleasure of hosting Israel’s National Police spokesperson – Chief Inspector Micky Rosenfeld. 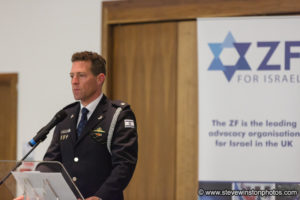 Micky grew up in London before making Aliyah at the age of 15. Following 8 years of service in the Boarder Police’s specialist counter-terrorism unit, Yamam, Micky was appointed to the position of Inspector in 2005 before being promoted to the rank of Chief Inspector in 2008.

The Chief Inspector spoke to a packed audience as part of the Kinloss Learning Centre. Rosenfeld gave an in depth insight into the security risks and opportunities in Israel and specifically in the capital, Jerusalem.

Rosenfeld spent much time during his talk looking at the threats inside Israel, in particular the recent wave of terrorist attacks over the past 18 months. He showed exclusive and in depth footage of these threats and explained thoroughly what the risk to Israel’s civilian population.

Following his talk Rosenfeld took questions from the audience. Answering a question on the ways the Israeli police do or don’t collaborate with the Palestinian Police and Palestinian Authority, Rosenfeld made the important point that there is regular cooperation, even daily cooperation between the Israelis and Palestinians, in all areas of crime from theft to car crime to intelligence shared on serious threats.

You can visit the Zionist Federation Facebook page to watch exclusive interviews with Micky Rosenfeld on a range of topics relating to his spokesperson role. 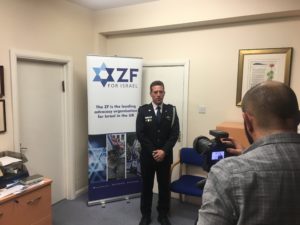 Chief Inspector Rosenfeld will be returning to the UK later this year and will be hosted by the ZF on a tour of the UK. For more details of this visit, please email events@zfuk.org or call the office on 020-8202-0202.