Israel, like Eurovision, gave me freedom to be who I am

By Dana International, winner of the 1998 Eurovision Song Contest. 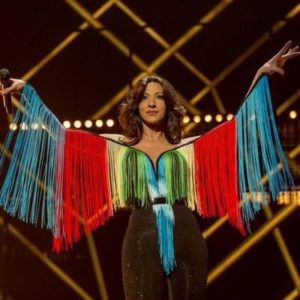 The noise. The size. The crowds, the lights and, most of all, the pride.

If there is one night in my life that I will never forget, it’s 9 May 1998. On that date, standing in front of hundreds of people, I won the Eurovision Song Contest. In the space of a few hours, millions around the world saw a different side to my country – Israel – than the one they were used to seeing.

As an Israeli, it was incredible to win for my country, a country that only that year was celebrating its 50th birthday. As a transgender woman, it was amazing to be the first openly trans entrant in the competition’s history. And as a human being, it was beyond belief to achieve recognition, acceptance and success on such a global stage.

So when the Zionist Federation UK invited me to headline its Eurovision-themed Yom Ha’atzmaut party this year, of course I was going to say yes. Another chance to strut my stuff in London, while also taking part in the biggest celebration of Israel’s birthday in the UK? How could I say no?

But this night is about more than just re-hearing some of our favourite pop songs. The story of me and Eurovision is more than that. It’s a story about Israel, and what it represents.

It would be easy to joke about a comparison between the two.

A noisy competition between many different candidates offering their unique visions? Watching votes get allocated in mysterious ways that often surprise you? A long night waiting to see which of the front-runners is eventually crowned the winner? Let’s be honest – it’s basically a more fabulous (and only slightly more frequent) version of our own Knesset elections!

More seriously, Eurovision and Israel have a remarkable connection. The message of Eurovision is one of peace, tolerance and hope, of people being brought together despite their differences. This is a message that resonates in Israel, a tiny sliver of those values in a part of the world where they are in short supply.

Eurovision celebrates the freedom to be who you are, and to express that freedom as you wish. Freedom is like a thread – from the same material you can fashion different designs, and it takes a lot of different threads to make any one item.

Part of that is the freedom to be proudly Jewish. I have Romanian-Yemeni roots, no longer growing on opposite sides of the world, but now interwoven in the same soil that first nurtured the Jewish people more than 2,000 years ago.

Only in the past few months have the last few Yemeni Jews been rescued from a county which, tragically, they can no longer call home.

But the response has to be love, not hate. I have many Arab fans across the Middle East, and my dream would be to tour the region so I could meet them, for them to share the freedom I have. Who knows what we could achieve? For decades, the politicians have tried to negotiate peace, so far without success. But I know music can reach the places they can’t. Art can build bridges, culture can smash stereotypes.

Let’s celebrate our music, our freedom, our Israel! The Zionist Federation’s Yom Ha’atzmaut party is going to be the biggest party for Israel in the UK, and I want as many of you as possible to join in. Eurovision was a night I’ll never forget. Let’s make this year’s Yom Ha’atzmaut just as unforgettable