For many, yesterday’s news about the United Arab Emirates (UAE) and Israel establishing official ties came out of the blue.

This historic agreement has largely attracted praise from across the world – including such countries as Egypt, Oman and Bahrain – with US President Trump’s son-in-law and senior adviser Jared Kushner saying that more Arab countries may soon announce normalised ties with Israel, following the US-brokered agreement. Kushner reportedly said that the US administration had been in talks with other Arab states to normalise ties with Israel and suggested that more announcements could be forthcoming in the next few months. The joint statement issued by the 3 countries’ leaders can be viewed below at the end of this blog piece.

This historic agreement represents the third-ever peace treaty between Israel and an Arab state and, in practical terms, will include the setting up of embassies, direct flights between Tel Aviv and Abu Dhabi, trade, an investment in Israeli efforts to develop a coronavirus vaccine (something which has been reported in recent weeks) and cooperation in matters of energy and water. For the UAE, another important element of the deal is the expectation that its citizens will be able to visit the Al-Aksa mosque in Jerusalem. Whilst the agreement “suspends” the issue of annexation, Israel’s Prime Minister Netanyahu has said, “I will never give up on our right to our land.”

Perhaps not surprisingly, and despite this deal between the UAE and Israel suspending any move on Israel’s part to extend its sovereignty to areas of the disputed territories in Judea and Samaria/West Bank and the Jordan Valley, the Palestinian Authority (PA) and the variety of Palestinian terrorist factions in the Gaza Strip, including Hamas, have all expressed their outrage at the deal.

PA Chairman Mahmoud Abbas recalled its envoy from the UAE in protest, whilst calling on the UAE to immediately backtrack on the “despicable” agreement with Israel. Hamas terrorist officials in the Gaza Strip, the same “officials” who continue to use all and any means to terrorise Israel, have slammed the agreement, saying it would “encourage Israel to continue its aggression against the Palestinians, whilst a Palestinian Islamic Jihad (PIJ – a terrorist group) official in Gaza said the deal “won’t change the reality of the conflict.”
All sadly typical really, given that the Palestinians have consistently chosen to decline every single opportunity and offer for peace with Israel.

Whilst the rest of the world is still reacting and adjusting to this new reality, some things are certain.

With this agreement, the UAE has essentially shown the Palestinians that they do not decide for all Arab states about making peace with Israel. So too has this move shown the European Union that the Israel-Palestinian conflict is not the be all and end all, and that its resolution is not a prerequisite for other Arab states making peace with the Jewish state. As for Israel, well, the country has once again shown that it is willing and able to compromise for peace.

We look forward to hearing more such announcements in the coming weeks and months and hope that the Palestinians will come to  realise that they too need to make meaningful effort and compromise if they are to ever achieve their aspirations of statehood.

For an in-depth opinion piece on this historic deal, click here to read a NYT article entitled “A Geopolitical Earthquake Just Hit the Mideast” by Thomas L. Friedman 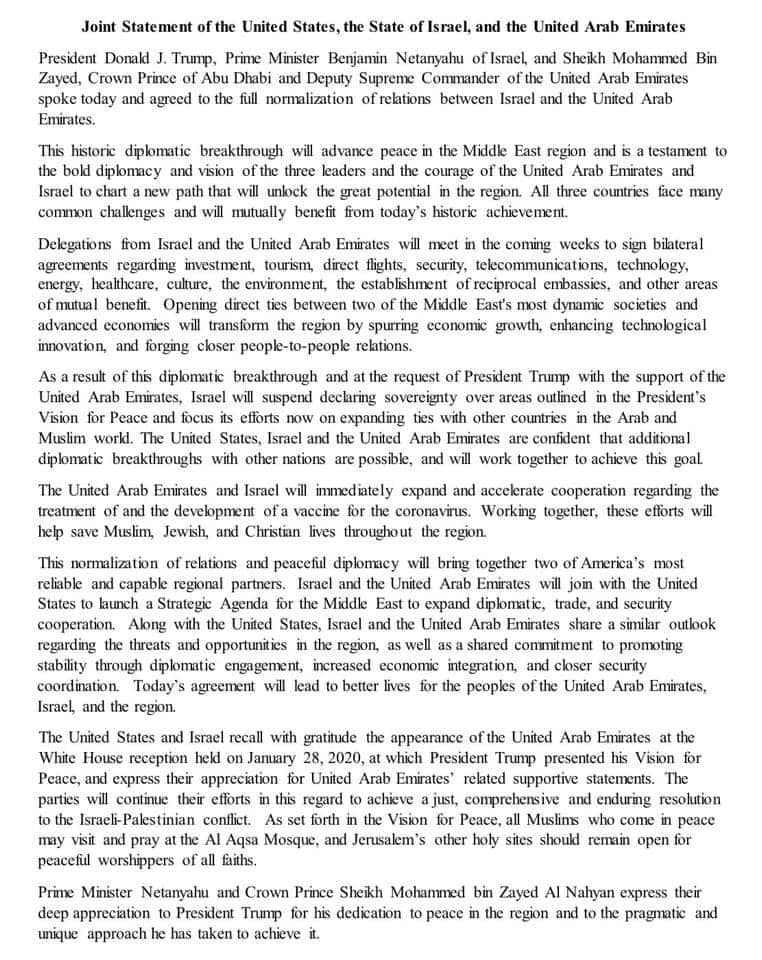