Is this the route to peace?

It’s been an exciting few days for those interested in the Israel-Palestinian issue and in particular those who look towards a future of real and lasting peace. In fact, this snowballing of peace-building steps didn’t suddenly happen this week, but has been going on for the past two years. 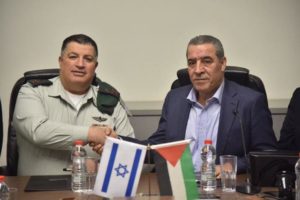 But this week is extra special. First came an historic electricity agreement. This agreement will increase electricity provision to the north of the West Bank significantly, including to the Palestinian cities of Jenin, Qabatiya and Tubas. The agreement inaugurates the first of four power substations that will be owned by the PA.

During the ceremony, Minister of Energy, Dr. Yuval Steinitz, welcomed the agreement stating: “This is definitely an encouraging historic moment in which we are inaugurating the first sub-station in the Palestinian Authority, and this is very exciting and encouraging. Israel is interested in promoting the infrastructure of electricity, water and natural gas in the Palestinian Authority, and here we are the first example of fruitful cooperation leading to prosperity. I am very pleased with the cooperation in this project, which is only positive, and we hope it will be a model for similar projects in the future.”

What he didn’t say, was that it would be the first of many with the second signing coming mere days later.

Jason Greenblatt, the US Special Representative for International Negotiations announced Thursday that Israel and the Palestinians reached an agreement concerning the long-discussed Red Sea-Dead Sea Canal, including the sale of 33 million cubic meters of water to the Palestinian Authority to relieve the water situation there. This is monumental. Many reading this won’t remember previous agreements being signed. For many this is the first of its kind in living memory.

The signing of these agreements, and the others that have taken place over the past two years have a real and genuine effect on the lives of each individual. With Israel and the Territories being in the heart of the desert and the Middle East, water has been a long-standing issue. There is a shortage of it across the region. Nobody is (excuse the pun) swimming in the stuff. It is one of the main reasons Israel put so much resource into desalinisation research and development. So these agreements will start to make the lives of ordinary Palestinians significantly better.

This marks yet more steps towards an increase in regional co-operation. That’s exciting. For anyone who truly believes that peace is possible, it is exciting to see Israeli officials and Ministers so publicly engaging and signing agreements with PA officials and Ministers. Israel currently has arguably the most right-wing Government it has ever had, and yet even this Government is able to sign agreements with our neighbours. That is something we should all be excited about. Just yesterday 72,254 people travelled from the West Bank into Israel, and 9,916 crossed the Allenby Bridge between Jordan and the West Bank. The signing of these agreements will make steps between neighbouring populations living harmoniously side by side.

So is this the route to peace? Well the answer is still a little unclear. It can be looked at in two different ways. On the one hand, by making these small agreements both sides are managing to avoid needing to talk about the tough questions. Neither side needs to go to the negotiating table and both sides can claim a small amount of international credit and victory.

So which hand do you fall on? Are you a cup half empty pessimist, or a cup half full optimist? Which one do the realists sit with? All of these questions are important to answer in order to know where we stand with the progression of a peace process. I know that I, for one, sit firmly with the second hand, and choose to believe that peace is a very real possibility within our lifetime. I believe that we must always be striving to better ourselves and striving to create a perfect outcome and a perfect world. When we give up on that struggle, well, we have given up so much more than just the reality. We have given up on the hope that the state of Israel was built and founded on, and the hope that we sing about every time we sing “Hatikva”. The hope for peace.