By Paul Charney, Chairman of the Zionist Federation. 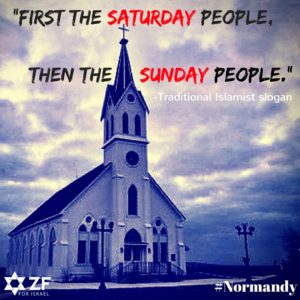 France, Belgium, Germany. Paris, Brussels, Munich, then back to France for Normandy. Whenever I see the latest headlines, I’m reminded of the line that “war is God’s way of teaching Americans geography”.

Nowadays, it seems more that terrorism is God’s way of teaching Europeans geography, as we raise our digital flags in solidarity with the latest victims.

The Quilliam Foundation has characterised this seemingly-unprecedented wave of violence as a global jihadist insurgency, drawing a link to the brutal guerrilla warfare Western soldiers faced in Iraq and Afghanistan. The war was over there – but now it’s over here, too.

With all due respect, I think the analogy is wrong, or at least not accurate enough to be helpful. Those insurgencies were part of an asymmetrical military battle between our forces and theirs.

But in Europe, soldiers are pretty low on the target list. Instead, victims are those who bear symbolic significance (Jews, blasphemous cartoonists), are easy mass targets (public celebrations) or are some combination of the two (the Bataclan audience). Terrorists are hitting soft targets, and when you’re in a supposedly-peaceful country, not a war zone, there is sadly no shortage of those.

A more obvious analogy, of course, is Israel, which is no stranger to terrorism. It’s also more helpful – if we’re looking for how a liberal democracy can balance competing, conflicting needs (protecting her citizens, maintaining civil liberties, respecting human rights), Israel is the market leader in how that can be achieved. Europe isn’t facing a global jihadist insurgency, so much as a global jihadist intifada, as Europeans find themselves struggling with the same quandaries and threats the Jewish state has for decades.

But accepting this proposition will come as a bitter pill to many who have convinced themselves Palestinian terrorism is by definition justified, understandable and acceptable. It will stick in the craw of those who for years have taken it as gospel that Israel’s responses to that same terrorism must obviously be counter-productive, morally repugnant, and therefore totally indefensible.

Two examples from the UK spring immediately to mind as to just how wrong-headed these individuals have been, triggered by the recent horrific murder of Father Jacques Hamel in Normandy.

This sadistic inversion of the age-old concept of seeking sanctuary in a church, with terrorists storming a place of worship and holding those inside hostage, brought back immediate memories of The Siege, an Arts Council-funded play of 2015 that recounted sympathetically the experiences of the Palestinian terrorists in 2002 who holed themselves up in the Church of the Nativity in Bethlehem, during the Second Intifada.

Humanising those poor, desperate Palestinians, forced to put others at risk by the brutal Israeli juggernaut that unfairly sought to arrest them for murdering civilians, must have seemed the only sane, sensible and sensitive choice by those responsible for The Siege. But I wonder if watching terrorists violently desecrate a church a little closer to home has given them any second thoughts?

Ditto too the moral trail-blazers at St James’s Church in London. You might remember that at Christmas 2013 it erected a giant replica of Israel’s separation barrier in its courtyard, not to highlight Israel’s need to protect itself from suicide bombers, but to condemn the negative impact this example of non-violent resistance was having on Bethlehem.

Of course, no mention was made of how Islamist intolerance was driving Christians out of the West Bank and every other Muslim-majority territory in the Middle East. That would be too divisive, whereas sticking it to Israel was clearly the socially-acceptable thing to do. But now that churches might have to consider replicating the security measures of, say, synagogues, and their faux-barrier might need to be replaced with something a bit more practical, I wonder if St James’s too might be reconsidering its initial position?

Necessity is the mother of invention, and bloody necessity has forced Israel to become the world leader in confronting terrorism.

That should be a source of comfort, not outrage, for Europeans. Because no matter how unpalatable it might seem to some, the truth is this: we’re all Je Suis Israel now.