EU review of Palestinian textbooks: a comedy of errors

In April 2019, the Institute for Monitoring of Peace and Cultural Tolerance in School Education (IMPACT-se) issued a comprehensive report of their assessment of textbooks from the Palestinian school curriculum being taught in Judea and Samaria / the West Bank, Gaza, East Jerusalem and UNRWA schools for the 2019–20 academic year. Despite expectations that the new curriculum would be more moderate compared with previous curricula taught between 2000 and 2016, the main findings of IMPACT-se’s analysis showed the new Palestinian curriculum to be more radical than those previously published, with a marked deterioration in content meeting UNESCO standards. Accordingly, then Vice-President of the European Commission, Federica Mogherini, announced that the EU would be funding a comprehensive review of the Palestinian Authority curriculum.

The Georg Eckert Institute (GEI) was appointed to carry out the review with a scheduled start date for spring 2019, with results to be made available by September 2019. An Inception Report outlining the methodology of the study was issued on 12th April 2019 but was, however, only made public on 18th June 2020 following an FOI request!

In March 2020, the ZF’s annual ‘Lobby Day for Israel’, held in partnership with Christian Friends of Israel, focused on this very issue – the hatred, incitement against Israel and glorification of terror in the Palestinian school curriculum textbooks. Speakers included IMPACT-se’s Marcus Sheff, MP James Gullis who, the following week led a Westminster Hall debate on “Palestinian School Curriculum: Radicalisation”, and Dame Louise Ellman, who had worked tirelessly during her time as an MP to push the government to take action against this issue. During the Lobby Day, delegates were given two copies of a ZF booklet (click here to read) detailing the extent of hatred, incitement and glorification of terrorists found in the Palestinian school curriculum textbooks, so that they could keep one for themselves whilst giving one copy to their MP on the day. All MPs and Peers who joined us for the Lobby were given a copy of the booklet and a digital copy was sent to every UK MP several days later.
Click the thumbnails below to read two MPs’ reactions to some of the content in the textbooks 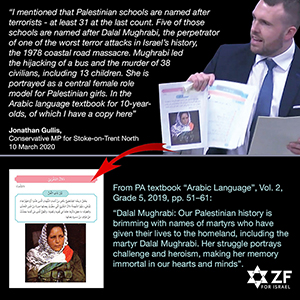 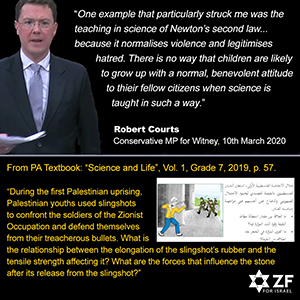 IMPACT-se reviewed the Inception Report and exposed a number of critical comprehension and methodological issues, raising concerns about the reliability of the study. The report found that the prevalence of factual inaccuracies in the GEI Inception Report put the scholarship of the Interim Report into doubt for reasons including, but not limited to, the following:

IMPACT-se’s review expressed other concerns in addition to those identified above and the full review can be read by clicking here.

As if this wasn’t frustrating enough, news broke this week that an online presentation was discovered of a classified EU report “praising” Palestinian textbooks for their “careful consideration” of the Arab-Israeli conflict. However, it was revealed earlier this week that the researchers had erroneously attributed the source to being part of the Palestinian Authority curriculum, when in actual facts, as confirmed in a subsequent report released by the Institute for Monitoring Peace and Cultural Tolerance in School Education (IMPACT-se) – click here to read – the source is actually from Israel’s Jerusalem Municipality Arabic textbooks and edited by Israeli educators!!!

A Jerusalem Post article published yesterday – click here to read – details how Labour Friends of Israel vice-chair John Spellar MP has written to MP James Cleverly, minister for the Middle East and North Africa, asking him to clarify the situation whilst Conservative Friends of Israel parliamentarians Stephen Crabb MP, Lord Pickles and Lord Polak have jointly written to Foreign Minister Dominic Raab, asking him to confirm that it is not the intention of the British government to use taxpayers’ money for inciting violence in Palestinian schools. The EU meanwhile has sought to distance itself from the presentation, telling The Jerusalem Post that the work referred to “a separate UK-funded study on the matter.”…

Surprised? Astonished?
IMPACT-se describes the EU-commissioned GEI report as “a comedy of errors from start to finish,” adding that “It is hard to fathom how it went so wrong” given that the review was “not a particularly complex project.”