Druze Veterans and former Minister speak to more than 300

Article written by Paul Charney, Chairman of the Zionist Federation of Great Britain and Ireland

If you‘ve been keeping up with the Jewish news in the last few days, you might well have come away with the impression that our recent gala dinner was something of a right-wing echo-chamber. One article focused on the controversy surrounding one of our speakers, while another focused the controversy surrounding one of our audience members. Conversely – and presumably to the surprise of those reading the articles – we’ve also come under fire because the event was apparently far too left-wing.  So perhaps a little bit more context is required.

The ZF strives to be a broad church (well, synagogue) and accommodate as wide a range of views as possible, both in terms of politics, religion and elsewhere. Inevitably though, that means that there will be disagreements between different members who often have wildly varying views.

Sunday night is a case in point. While much of the attention has been on our main guest speaker, Gideon Saar, and how he was treated, almost none of the coverage reflects that he wasn’t the only guest. We also had a group of Druze speakers from Beit Shaan in Israel, who wanted to talk about their experiences as a minority group within a Jewish state. One, Afif Satawi, recently lost his son Hail in a Palestinian terror attack. The other serves in the army. We have brought them here to the UK to discuss their experiences, as non-Jews who believe in defending the Jewish state they are citizens of.

Part of the reason they are here is to show a different side to Israel, to show that it is a country that values and respects all of its citizens. But that doesn’t mean it is perfect, by any means. As any of the 300-odd people who were with us on Sunday will tell you, Ashraf Halabi spoke at length about the difficulties and, yes, discrimination his community still faces. I know that some on the left praised us for giving him the opportunity to raise awareness of this issue, while others on the right were very uncomfortable by his frank opinions. Whether or not I or the ZF agree with everything they said is irrelevant; we gave them that platform and they were entitled to it. It should go without saying, however, that I personally believe that Ashraf Halabi and Afif Sitawi and Hail Sitawi are Israeli heroes.

Gidon Saar is also entitled to have his views heard. He is a former senior politician, and a potential future Prime Minister, and so his views also carry weight. Of course, that doesn’t mean that the ZF necessarily agrees with everything he says, or everything he ever has said. That would be impossible given the differing views both within the ZF, and also of the many, many different speakers that we have invited over to the UK. Our guest speaker at our 2014 Gala dinner, for example was then leader of the Israeli Labour party, Isaac ‘Bougie’ Herzog. In 2015, we also hosted Shimon Peres – a pretty well-known proponent of the peace camp. Were those invitations ringing endorsements of their every belief and statement? That’s neither here nor there; as senior Israeli figures, their views were worth hearing, whether or not you agreed with them. 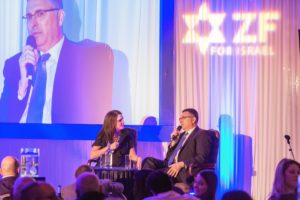 There is one major difference between now and then though – we now prefer a format of a direct interview, rather than simply a planned keynote speech. This is partly so that we’re not seen to be necessarily endorsing any one politician but also because it’s simply much more engaging for the audience. And we chose Sandy Rashty as our interviewer as someone who is not only aware of the tensions and debates within our community (something that a non-Jewish interlocutor might not be aware of or might not be comfortable broaching) but is also obviously a fine journalist who is more than capable of addressing those issues.

It’s therefore not only obviously disrespectful to Saar for a tiny handful of individuals to actively disrupt him, but also very disrespectful to Ms Rashty. She was there to challenge him when she felt necessary – whilst also recognising that she couldn’t go full Paxman on someone who had agreed to be there as our guest, as opposed to a minister being accountable to defend a policy in front of a foreign audience.

Again: while I have received some complaints about the decision to allow our Druze guests to voice their views – views which actually were left unchallenged – I would have a pretty poor opinion of anyone who had decided to lambast them disrupt them and then storm out the room. It would rightly have been seen as intolerant and just plain rude, and I think the same applies to those who couldn’t bring themselves to listen to Saar on Sunday.

Finally, to Katie Hopkins. As with anything involving Ms Hopkins her presence at the dinner has attracted a fair amount of criticism and controversy. Perhaps inevitably this has been spun as us having ‘invited’ her, and presumably also evidence of us also chumming up to her as a supporter of Israel, irrespective of her other views. The truth is more mundane; one of our attendees simply brought her as a guest. And while I don’t agree with the stereotype perpetrated by some on the right that left-wingers are ‘the real fascists’ who attempt to quash all dissent via political correctness, it’s not hard to see why some people might believe that when we’re now being denounced not only for our choice of speakers, but for who we allow to hear those speakers as well.

As anyone who was present on Sunday will tell you, there was a wide range of individuals from all sorts of backgrounds in the room that day. Ironically, it’s has actually been one of our most successful dinners.

We provided interesting, honest and challenging speakers, so that everyone came away with a better insight into the reality of Israel and we have received more divergent and provoking views than ever before.

We want to keep it that way – even if that means we are never going to be able to please all of the audience all of the time.