This week, the ZF together with the WZO, brought Dr Uzi Rubin over to the UK from Israel to commemorate the 72nd anniversary of the November 29th, 1947 UN Partition Plan at the Borehamwood and Elstree Synagogue.

Uzi Rubin was the founder and first Director of the Israel Missile Defence Organization (IMDO) in the Israel Ministry of Defence (MoD). He founded and led the Arrow Defence program from its inception in 1991 to the first delivery of operational missiles in 1999. He also directed major defence programs in Israel Aerospace Industries and the Israel MoD where he was one of the founders of Israel’s space program. He also served in the Israel National Security Council as a director on technology and proliferation issues and was twice awarded the Israel Defence Prize, in 1996 and in 2003. He is currently a Senior Researcher in the Begin Sadat Centre for Strategic Studies as well as in the Jerusalem Institute for Strategic Studies where he publishes frequently on national security issues. He has recently received his PhD in political science from the Bar llan University and has authored his soon-to-be-released book, “From Star Wars to Iron Dome: The Controversy over Israel’s Missile Defence”.

Dr Rubin addressed a packed audience, speaking about his own personal experiences of that November day in 1947 and then the jubilation of 14th May 1948 when Ben Gurion read out the Declaration of Independence, a jubilation which was soon overshadowed by the imminent threat of attack from the nascent Jewish state’s neighbours. He also spoke about the ongoing struggle and need to defend Israel against the myriad of threats on all its borders, its missile defence programmes and capabilities.

Thank you to all those who attended 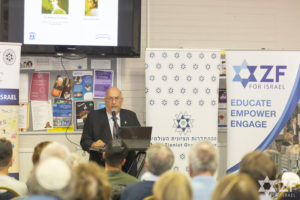 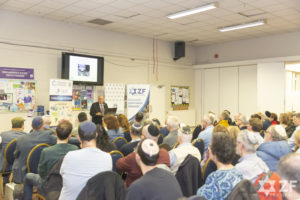