This week the Zionist Federation of the UK and Ireland joined forces with the World Zionist Organisation’s UK delegation headed by Itzhak Sonnenschein, to celebrate the 100thanniversary of the birth of Israel’s 6thPresident, Chaim Herzog.

Born in Belfast, and shortly after moving to Dublin, Herzog was always very proud of his Irish heritage. Moving to British Mandate Palestine in 1935, Herzog went on to have a very impressive career in public life. Although his contribution to Israel and the world was significant throughout his career – in the British Army, the Israeli Army, politician and as President of Israel – perhaps his most memorable of contributions came as Israel’s Ambassador to the UN. At the start of his term as Ambassador, the UN passed their now infamous “Zionism is Racism” resolution (3379). During his speech to the General Assembly following the adoption of this resolution Herzog, like his father had done years before with the British White Paper in Palestine, ripped up the resolution saying “For us, the Jewish people, this resolution based on hatred, falsehood and arrogance, is devoid of any moral or legal value. For us, the Jewish people, this is no more than a piece of paper and we shall treat it as such.”

To celebrate the 100thanniversary of Herzog’s birth, the ZF and WZO coordinated a 3-day tour of Northern Ireland and the Republic of Ireland for a delegation, including the 4 children of Chaim Herzog – Isaac, Michael, Ronit and Joel. The trip included a visit to the places where Herzog was born and grew up in, as well as seeing the complicated sectarian relationships in Belfast and how it reflects on support for either side of the Israel-Palestinian conflict.

As well as events hosted at the Northern Irish assembly (Stormont), the Irish Foreign Office, Belfast synagogue, being hosted by the Irish President and much more, the ZF were very proud to have the opportunity to speak with Isaac Herzog, Haim’s son, former leader of Israel’s opposition, former chairman of the Israel Labour Party, and the newly elected chairman of the Jewish Agency.

You can watch the interview by clicking on the image below or here. 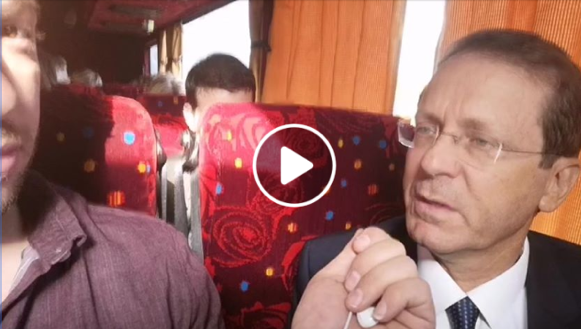 The trip was a resounding success, encouraging further dialogue between Israel, the UK and Ireland

Whilst visiting Northern Ireland as part of the trip, Israeli Ambassador to the UK Mark Regev spoke at Queens University Belfast, where he was greeted by 20 – 30 protesters chanting “From the River to the Sea, Palestine will be free”. These protests were met by the support of the Student Union. However whilst the protesters were chanting and singing outside, the Ambassador held a positive and productive dialogue with Masters and Doctorate students of the University, discussing the possibilities for peace.