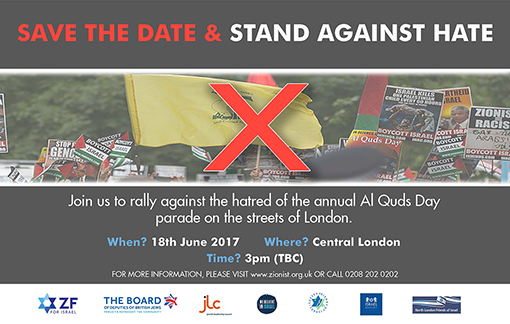 In recent months, petitions have been launched to call for the annual Al Quds Day parade to be cancelled / banned, but despite these petitions having attracted thousands of signatures, as well as emails and letters sent to the Mayor of London, MP’s and the Metropolitan Police, the parade is currently still going ahead. Al Quds Day has its origins in anti-Zionism and through the years, the parade through London has become increasingly hostile, with its supporters overtly proclaiming their support for terrorist organisations and shamelessly calling for the destruction of Israel.

We are organising a counter demonstration.

The counter demonstration is supported by the World Jewish Congress, Board of Deputies, Jewish Leadership Council, We Believe in Israel, Sussex Friends of Israel, North London Friends of Israel and the Israel Advocacy Movement.

We are delighted to confirm that Kay Wilson, a survivor of a brutal terror attack in Israel in December 2010, will be speaking at our counter rally, joined by Paul Charney (ZF), Simon Johnson (JLC), Steven Jaffe (BoD), Matthew Offord MP(Cons), Andrew Dismore AM (Lab), Vladimir Bermant (WJC) & Michael McCann (IBA-ZF).

There are around a thousand Al Quds Day parade supporters expected this year so let’s get a thousand Zionists out there to stand up for Israel, for Zionism, for peace and democratic values.

As with all of our organised demonstrations, this has been coordinated with the Metropolitan Police and CST, both of which will be in attendance on the day.

To ensure that we get as many Zionists as possible to support our counter demonstration on the day, if any of you are planning to travel into central London on the Tube, then please contact our friends from North London Friends of Israel, Harry Goldstein and Diana Stanley, to let them know from which station you will be travelling,
Harry Goldstein can be contacted via email at nlfriendsofisrael@gmail.com
Diana Stanley can be contacted via email at distanley@aol.com

The counter demonstration will take place in the vicinity of Grosvenor Square, a short walk from the nearest underground station, Marble Arch.

The demonstration will commence at 3pm, Sunday 18th June with speakers commencing from 3:30pm.
The counter demonstration will be at the southern end of North Audley Street, at intersection of Upper Brook Street and Grosvenor Square – nearest station is Marble Arch (Central Line), although there is also Green Park a little further away (Jubilee, Piccadilly and Victoria Lines).
In the meantime, please email either Harry Goldstein or Diana Stanley to let them know if and which Tube station you will be travelling from.

Remember, there is power in numbers so come and join us to make our voices heard!