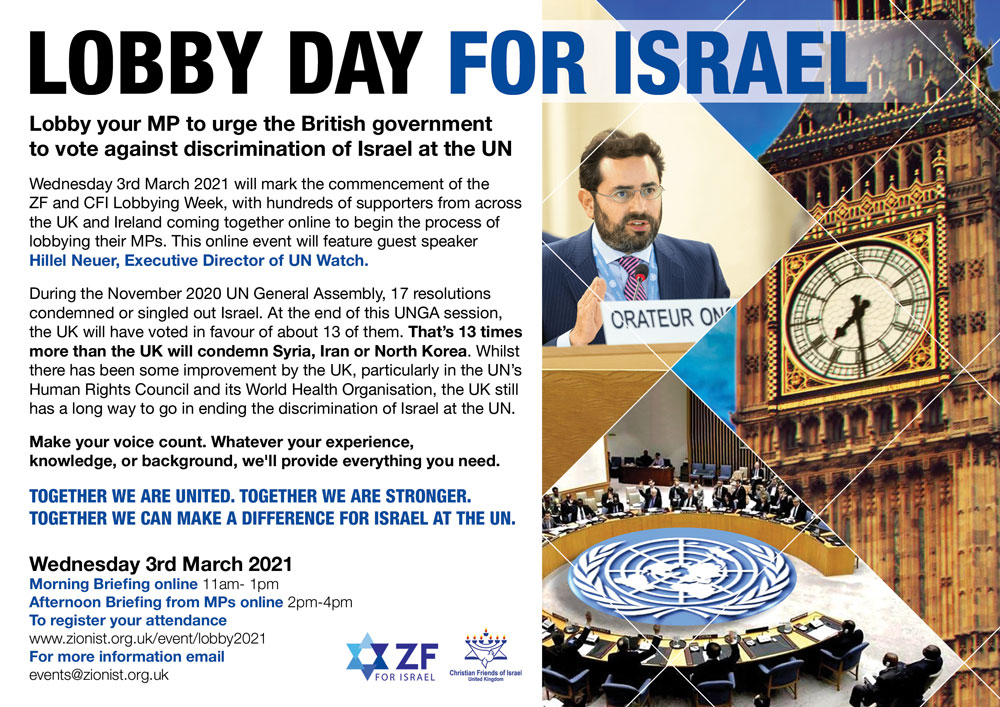 Wednesday 3rd March 2021 will mark the commencement of the ZF and CFI Lobbying Week, with hundreds of Israel supporters from across the UK and Ireland coming together online to begin the process of lobbying their MPs.
This year’s Lobby day will focus on urging the UK Government to stop its support for UN singling out of Israel.

We are delighted to confirm that our keynote speaker for this year’s Morning Briefing session is Hillel Neuer, Executive Director of UN Watch.

SO WHAT DO YOU NEED TO DO?

First of all, register for FREE now to attend our online Lobby Day on Wednesday 3rd March, 2021 by scrolling down to the bottom of this page.

Secondly, sign up to this letter writing campaign, running in partnership with the Israel Britain Alliance, the aim of which is to get as many of us possible starting with the lobbying process to bring this important issue to the attention of as many MPs as possible.

HOW THE UK SUPPORTS THE TARGETING OF ISRAEL AT THE UN

Since 2015 to date, the United Nations General Assembly (UNGA) has voted 112 times against Israel.

Regrettably, the UK government only supported Israel on 3 resolutions.
It voted against Israel on 82 resolutions and abstained on 27 occasions.

If the number of resolutions passed shows the UN’s level of concern about an issue, the United Nations believes that Israel’s democracy is more dangerous and insidious than Iran’s hegemony, North Korea’s armoury of weapons, the catastrophic Syrian civil war and all the other combined actions of the (mostly) non-democratic states that comprise this intergovernmental organisation.

As recently as the UN General Assembly in November and December 2020, Israel was condemned 17 times.
The UK supported 12 of those resolutions against Israel.

This vitriol directed towards Israel at the United Nations is at best detached from reality and at worst fraudulent and antisemitic, and while there have been the occasional enlightened moments in the UK’s voting record, our country is complicit in these attacks.

Please use this website https://www.israelbritain.org.uk/zfuk/ to email your MP asking why the UK stands alongside some of the world’s worst human rights offenders against Israel and whether your MP will attend our Lobby Day briefing by UN Watch’s Executive Director Hillel Neuer about this issue, on Wednesday 3rd March 2021 at around 12:15pm

Please do email Steve Winston at steve@zionist.org.uk with any reply you get from your MP.