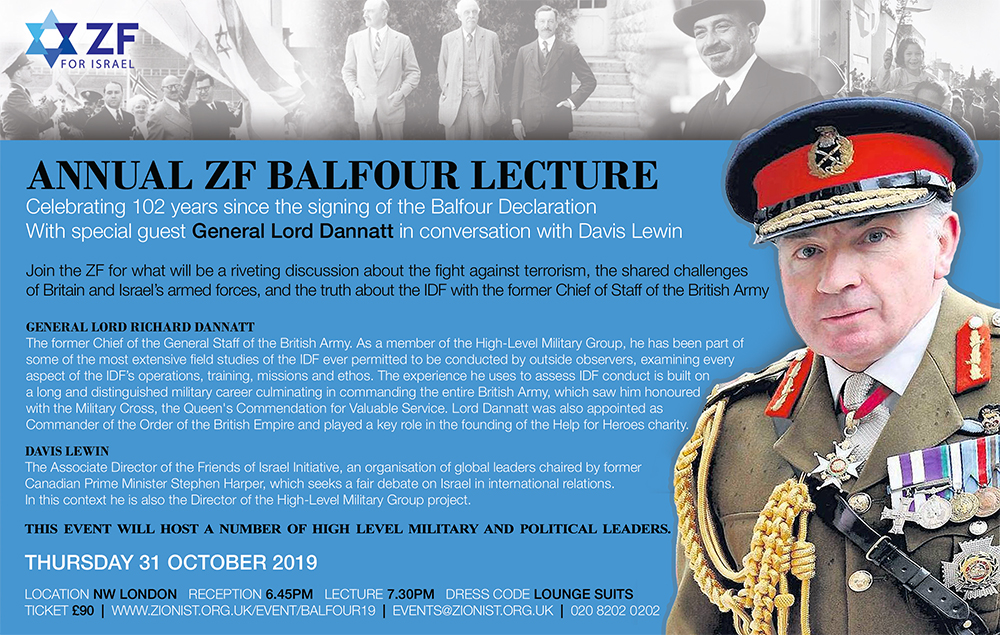 Celebrating 102 years since the signing of the Balfour Declaration.

Join the ZF for what will be a riveting discussion about the fight against terrorism, the shared challenges of Britain and Israel’s armed forces, and the truth about the IDF with the former Chief of Staff of the British Army

General Lord Richard Dannatt is the former Chief of the General Staff of the British Army.  As a member of the High-Level Military Group, he has been part of some of the most extensive field studies of the IDF ever permitted to be conducted by outside observers, examining every aspect of the IDF’s operations, training, missions and ethos.  The experience he uses to assess IDF conduct is built on a long and distinguished military career culminating in commanding the entire British Army, which saw him honoured with the Military Cross, the Queen’s Commendation for Valuable Service. Lord Dannatt was also  appointed as Commander of the Order of the British Empire and played a key role in the founding of the Help for Heroes charity.

Davis Lewin is the Associate Director of the Friends of Israel Initiative, an organisation of global leaders chaired by former Canadian Prime Minister Stephen Harper, which seeks a fair debate on Israel in international relations.  In this context he is also the Director of the High-Level Military Group project.